Making A Move To Asia To Live And Work

It might feel like a big move, and it is, but if this is a dream of yours, it might not be even that far out of reach. Asia offers low cost of living, job opportunities and safe and friendly environments. As long as you can handle and even embrace the culture shock and new language, you can spend fantastic years, even a lifetime, in Asia.

Living in the United States, the UK or Australia is expensive, especially when it comes down to food. In Asia, you can live like a king or queen for a fraction of the cost. Dependent on the city you choose, you can reduce your food and drink bill five-fold, and that’s with a very active social life.

Travel in and around Asia is dirt cheap.

For a few hundreds of dollars, you can hop on a plane and explore pretty much every outskirt of Asia.

Many budget airlines fly to different destinations within Asia. The key is to know that some of these are not on the aggregator sites such as Skyscanner.

Look for AirAsia, IndiGo, Jetstar Asia, Lion Air, Nok Air and Scoot to name a few. In addition, bus and train travel is extremely cheap as well. The trick is also to take night buses or trains. And while you are travelling and taking taxis, make sure to agree on the ride price up front!

Living in Asia is generally cheap as well. Unless you are planning to live in Singapore, most other Asian countries offer very decent rents and house prices to buy.

You will be surprised how safe and friendly the people are.

Locals are in most cases friendly, amicable and love guests from overseas.

Most of these countries rely on tourism as a vital source of income, and therefore the safety of tourists is held in the highest regards. Violent crimes, especially against tourists, are infrequent. Most criminal acts against tourists will be either scams or stealth theft, such as pick-pocketing.

Use common sense and read up on how to avoid scams and to be a victim of pick-pocketing.

Statistically speaking, the highest risk for tourists is getting into a traffic accident. So take care renting a vehicle.

With all the positives, there are a few cons of moving to Asia.

The first being the temperature. In most countries, there is not much of changing seasons and most of the year will be hot. The modes will go from hot, to very hot to extremely hot. So, you either will have to get used to the AC running or learn how to tolerate the heat. If you are one for seasons and enjoy some cooler temperatures, you might need to do some soul searching before committing to moving to Asia.

And no matter how long you have lived in Asia, a fact of the matter is that you will always be an outsider and tourist. This means that you will forever be slightly tiptoeing around and be the first one to be targeted for a scam or theft, or even the first to blamed when something is wrong.

Most Asian countries are quite homogeneous, and you might face some form of racism, regardless your skin color. It might take a few years (or decades) for discrimination to be an actual national debate, so this would just be a fact of life.

The above is usually one of the big complaints that someone would have re-immigrating to the West after living in Asia for a while.

The main complaint is mostly the culture shock stemming from trash and pollution.

Another thing is air pollution.

However, if you can stand these things, maybe even take some precautions, then Asia could be your next fabulous destination to live and work 🙂

Is Your Career Leaving You Unfulfilled? 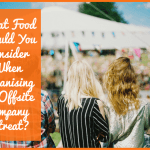 What Food Should You Consider When Organising An Offsite Company Retreat?