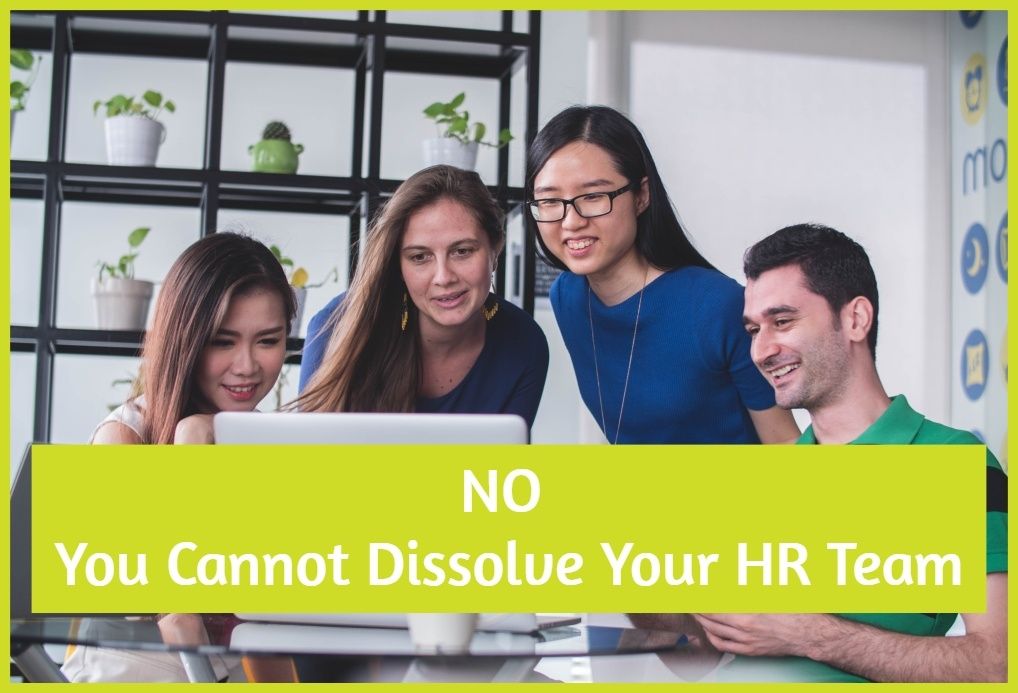 No, You Cannot Dissolve Your HR Team

A familiar daydream of many an employee and employer has involved seeing the walls of the HR department crumble and, one by one, all their people brought into the middle of the open office for a humiliating public trial followed by a public dismissal!

Fortunately for those working in Human Resources, most envision such an event on a less physical and viscerally satisfying level. Despite the increasingly loud voices claiming it is now obsolete, it is highly unlikely we will greet the sad day when such an awful thing happens. Even so, HR has few reasons to worry.

Fierce critics start their charge on the very name of the department. Indeed, seeing Human Capital as a form of resources makes you think of exploitation. In fact, lessons from the past explain why some employers still believe they have the life or death right over their workers. Fortunately, for many HR teams, there is a simple solution to get rid of the stigma, at least at a local level. Many organizations baptized HR now with fancy names like “Employee Experience” or “Employee Success.” Although a bit confusing, it does work to make employees feel less like coal thrown in a 19th-century steam engine.

This was not just a marketing trick.It signaled that these companies were mature enough to understand that you cannot simply cut out the middleman- the one responsible for making the whole thing work. You see, the relationship between employees and their company will always need some tailoring.

You can’t just buy a dress and hope it will fit your for a lifetime, not when junk food and couch entertainment are so readily available. In that same way, organizations cannot hope to minimise the importance of HR and make it a one-time only fix. As times change, so do people’s needs.

“The wolf changes its skin, not its habits.”

Take that old saying and throw it in the shredder!

HR changing its name does more than comfort employees. The christening also comes with a new point of focus.

Instead of lighting up the obscure middle ground and inviting business partners to dance, HR now looks more carefully at the individual inside the employee. Yes, he/she is no longer an expendable resource, but rather another form of capital that needs to be maintained, enhanced, and expanded. The energy sector comes again to our aid. The modern HR vision is one of the renewable, eco-friendly human resources. It does not mean that the wind or the sun will take your place in the cubicle and spin the corporation cogs for free. Rather, the new vision moves accent from a careless exploitation to a fostering that promotes responsibility for the future.

Those who want to see Human Resources burn are infuriated by the image one department serving two, while and colluding with each one at the same time. Indeed, when it comes to salaries and other work benefits, employees and employers may have their trench war to carry out, but for anything else, they are on the same side.

Burning the HR bridge is like giving the two sides different uniforms and asking them to conduct military drills in the same field while sending the peace negotiators away on vacation. Something wrong is guaranteed to happen.

HR will not die because the image of it being a backstabbing double agent is false. HR was and will continue to be an interface of the employer, a department defusing the delicate money issues and allowing workers to focus on the work in hand.

HR has faced assassination attempts in the past, and it is no longer a novelty that some companies hate having that two-letter department on the payroll. Externalisation happened and will continue to happen in the future. The good news is that the new holistic approach to human capital is likely to reverse the trend and decisively advise even smaller companies against that. Forget about laughing at how your Human Resource folks tremble each time you randomly talk about Deloitte.

Such conglomerates might have sucked a lot of blood from the HR world, but their cold approach of getting the external job done and moving on the next as soon as possible is destined to fade out. Companies want an HR department that is committed to long-term – if not lifetime goals. Hear that? Life, not death. Like the Phoenix, this department was reborn into something able to meet the demands of the new era. It happened unintentionally but, nonetheless, change is there!

Hoards of Millennials are racing to snap up jobs, and they will soon be followed by Generation Z. Do you know what they want? No, it is not always about wearing skinny ripped jeans and having a nerd cave in which to spend the lunch break playing games and enjoying memes. They want a friendlier, more casual approach to the whole contract/duties thing 🙂 They want the workplace as an experience, one from which they can extract pride... They want to be able to see their company rank among the top best places to work. Surprisingly, younger generations put a much smaller emphasis on the paycheck and extend talks at a completely new level – motivation, potential to grow, and other prospects for the future. Overall, they want to engage more with the company beyond the contract duties and adopt and leave their mark on its culture. Some even envision their role evolving from employee to stakeholder.

Repeat after me, “I cannot get rid of the whole people function department!”

While killing HR seems impossible, we cannot rule out a potential self-destruction. Like many other structures that eventually died out, Human Resources has to keep up with the winds of change to survive. Change is not all about using software to replace the old fashion way, but rather about not closing one’s’ eyes on the mounting evidence building up on the market. It is about recognizing new models and implementing them.

A very simple way of structuring the responsibilities of the HR department that survived the hypothetical gunpoint is the 3Fs model of Nitro Employee Experience.

The first F stands for Fun.

Works needs to be fun, right? Most of the Millennials and the Zs grew up part caught in the virtual world of their computer games. Replacing all that with work that is dull, highly repetitive and entirely not fun cannot work. Having fun in the workspace has always been a heavy stone for managers. How much is enough? How much is too much? From alcohol-soaked Christmas parties, to having their very own games room, companies know that a happy employee is a productive employee, one that saw enough distractions to be capable of resuming work with a renewed focus and commitment.

The next F comes from Fringe.

Talk about these with older generations and they will laugh at you. Today’s young employees want continuous career development and personal growth, hate being stuck on things that seem to be too easy, and overall value stuff that makes no sense to a veteran. Times are moving fast and employees now getting bored easily are a direct consequence of that. Where does HR stand here? By allowing all of the mentioned to happen in the workspace – during the schedule, and without disrupting the completion of normal tasks.

Obviously, the third F is about Fundamentals..

…the one that makes the job a job. What you’ve read so far might just sell you the wrong idea. Do not think that Millennials would rush into an interview completely ignoring salary and other benefits and filling the heads of the interviewers with visions and values. Such an image could not be further from reality.

Some still think Human Resources is a bureaucratic dinosaur that needs to vanish and take the form of software. We have bad news for them! Paperwork is required by all companies to retain sanity, and no Deep Blue will ever solve the organizational problems that currently pass through HR. Yes, you could use algorithms to go through large databases and select the right candidates. You could also deploy advanced analytics to carefully monitor performance and take the optimal decisions for improving the employee experience. Eventually, you will be stuck at what is the current fringe of artificial intelligence – having a meaningful conversation with a human being and understanding psychology.

The lengthy interview process of most corporations makes many employees disregard the HR representative with whom they make the first contact. Anyone can read a CV, exchange a couple of jokes, and ask about the weather. Might as well shoot them! For the untrained eye, the millions of sensors that come to play in direct one-on-one interaction are invisible. They might not know about reading body language, processing the non-verbal, and extracting all kind of meaningful information. Yes, reading soft skills might not be as important as assessing skills relevant for the job, but they play their part.

Employee retention is one of the hottest topics of today’s market.

As we saw earlier, younger generations are picky when it comes to the workplace where they commit a third of their daily hours. Because of the increasing number of opportunities, work collaborations tend to be more and shorter. It is hard to say – if we are really heading towards a gig economy of small projects, online profiles that make selection easier, and fewer indefinite period contracts. The current situation affects the HR department, both positively and negatively.

Short term and project oriented jobs mean that it is less important to have a full profile of your employee before striking a deal.

A growing number of freelancing platforms, and even social media like LinkedIn, work to offer candidates. On the other hand, HR might come in handy when your company is certain that a candidate fills the position perfectly and needs to retain it in the future. We will revisit the concept of employee experience to understand how this new name given by some to HR helps in weighing in decisively. We tend to create emotional ties with the persons, places, and objects we like. The same way we commit to buying a house because it meets our demands in terms of fulfillment and happiness, sticking with a job can take place even when a higher financial offer comes to you. Modern HR is now responsible for shaping the workspace so that it becomes“addictive” for those spending time there.

Work is no longer the place we dread going to and where employees keep an eye on the clock.

A new approach has turned the office into something capable of creating memorable experiences. Modern HR understands that today’s consumers no longer commit their shopping decision based solely on objects and services. We go on vacations no longer to visit a place, but rather for the whole package – “the total experience”.

In the same way, we choose a workplace for everything that happens in between, that means we value not only the work itself and the payment, but also the small things that make everything easier to bear and even pleasant. It can be the coach that offers you those delicious power naps, or the coffee table on the veranda.

The bottom line is that you cannot kill the HR department because it has already morphed into something else. We should call it the * EE, Employee Experience *, and learn to see the better way of “selling” a job as a package. 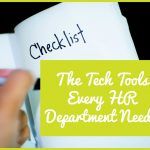 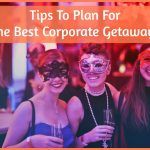 Tips To Plan For The Best Corporate Getaways