Chaos is more freedom; in fact, total freedom. But no meaning. - The Time Traveler's Wife

— The Time Traveler’s Guide To HR

Beginning more out of a want for higher efficiency than a push for less discrimination and harassment, Human Resources was born from the ideas of Frederick Taylor and his Scientific Management in the early 20th Century.

By taking apart the current business model of the time period, he began asking questions about workforce productivity and the people management function.

This eventually flowered into a full movement spearheaded by Elton Mayo when he recognized that things outside of money and working conditions stimulated workers to perform better.

Eventually, psychology, theory, and behavior studies entered the arena and the discipline was born. This is why therapists and psychologists are different, check it ou via BetterHelp: https://www.betterhelp.com/advice/psychologists/what-is-the-difference-between-a-therapist-and-a-psychologist/

Even with its acknowledged existence, the likes of Carnegie, Rockefeller, and Roosevelt had already started to change the employee-employer landscape with many employees entering into unions. Because of the depression and the effect of the two world wars on the economy of the US, union numbers fell enough that workforce management was able to shoehorn itself into the vacuum and begin the slow process of creating an entire department.

Today, companies view their employees as vital assets to the welfare of the company itself and seek to treat them as such.

The HR department currently heads up all leadership and culture within an organization through for example ‘HR business partners’ that work closely with upper management to ensure the HR goals coincide with company goals. From new hires to dealing with personal issues employees have, HR is an integral part of keeping a business successful.

On top of that, as you know HR often deals with lobbying efforts to reinforce the importance of protecting the employees and maintaining their rights as individuals.

From these early beginnings and now with the current trends; Human Resources has been headed toward a human capital and people focus.

Though still under heavy criticism (as most radical ideas generally are), human capital takes into account the creativity, attributes, and all other areas that lend – to a company’s and nation’s economic value.

The underlying principle of this school of thought is that if you invest in the growth of the individual, they, in turn, will add to the overall economic power.

Because of the exponentially technologically changing world, companies need more and more creative thinkers to keep pushing the bounds of marketing, and this cannot be achieved if all employees are treated to general rules that ostracize those that do not fit the mold.

It is an exciting time for both employee and HR as they are travelling through time seperately.

Poised on the precipice of heavier focus placed on the individual, it is human resources that is at the head of this push.

Through their existence, the work place has become safer, cleaner, and far more enjoyable than ever before. If trends continue the way they are now, our future generations will experience a level of people management benefitting them at levels yet unseen!

before it is so far – the people operations team needs to start travelling through time to catch up with today’s reality.

Human Resources Trends You Did Not See Coming 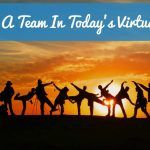